Why? Why these challenges…

I often get asked why – why are you doing these challenges? why are you supporting Make-A-Wish UK?

In response, I thought I would share a few updates each Monday in which I will share some of the answers and reasons. In this second, of three, updates I wanted to share some of the thoughts behind the challenges themselves.

I am, over the course of 2017, taking on 12 challenges which include a gruelling 120km walk from London to Henley, full and a bunch of half marathons, as well as cycling from Land’s End to John O’Groats later in the year. All in all the challenges will see me walk, swim, run and cycle over 1,500 miles in aid of Make-A-Wish by the end of the year.

To date I’ve run a 10km, completed Tough Mudder, taken part in two half marathons, cycled on a static bike for 12 hours and cycled 144 miles from London to Brighton and back home. Why? 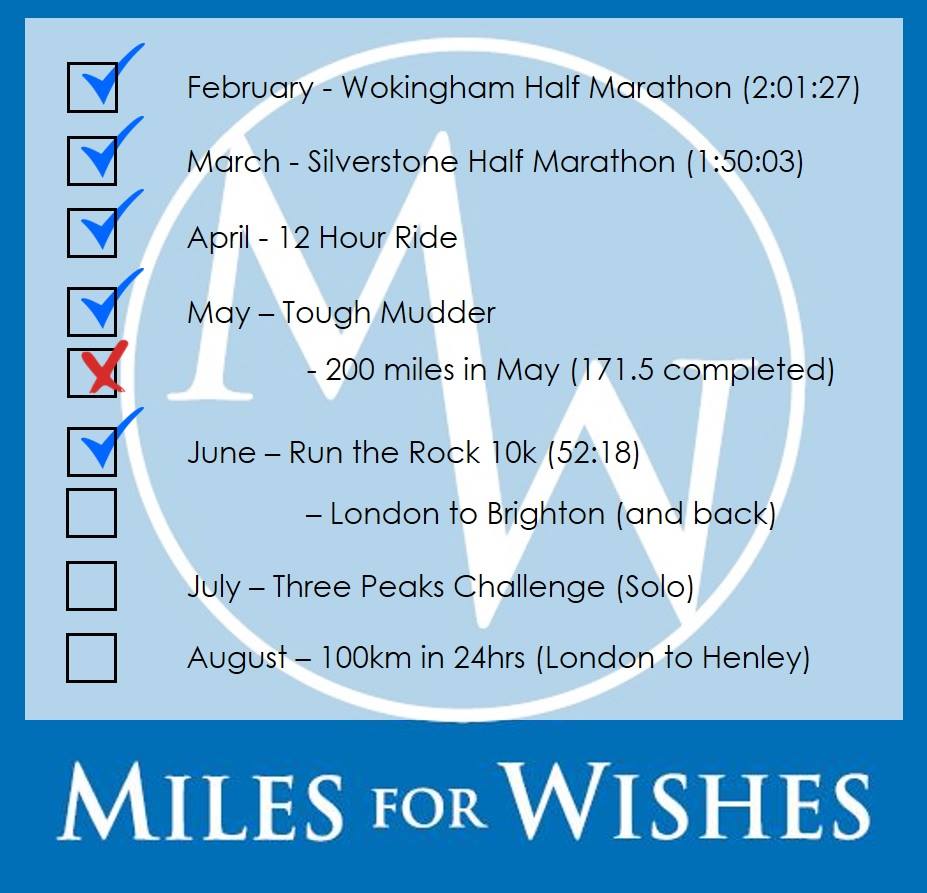 I went through a period of my life not being particularly happy or healthy and I knew something needed to change. I was never overweight but I suffered from a number of illnesses which required a brief stay in hospital, all of which stemmed from a sedentary lifestyle and some bad diet choices. So a chance to re-evaluate came along and I took some time to really decide what I wanted from my life and came up with what I considered the essentials – to be happy, healthy, to improve the relationship I have with my children and then to get on and do some of the things I’ve always wanted to.

So this journey was never about losing weight or becoming a professional, just finding something to be passionate about and to lead a life that focused on experiences. I’m sure like me you’ve got a list of things you want to do, not a fan of the term but essentially a bucket list. So coming up with some of challenges has been really easy – in 2006 years ago I ran Silverstone Half Marathon (my first and last for 10 years) and as such it was high on the list of ones to do again. This was how the list of challenges started, I signed up for this and Tough Mudder and thought ‘what if I did one thing every month?’. So simply made use of Google and got searching for ideas.

I grew up watching Ray Mears and enjoying his passion for the UK’s amazing countryside and wildlife and as such exploring the wilds has always attracted me – if you’ve never seen the episode where he builds a canoe from Birch bark, then you’ve missed out, it’s an incredible watch. When you’re walking, running and cycling means you see so much more, you find new things and places you’d never see from a car. That’s why when I’m training, particularly on the bike, I like to have a point of interest or a new place to ride out to. Again, I don’t wear headphones or listen to music when I’m out – I just prefer to be able to hear what’s going on around me especially when I’m out on the trails. 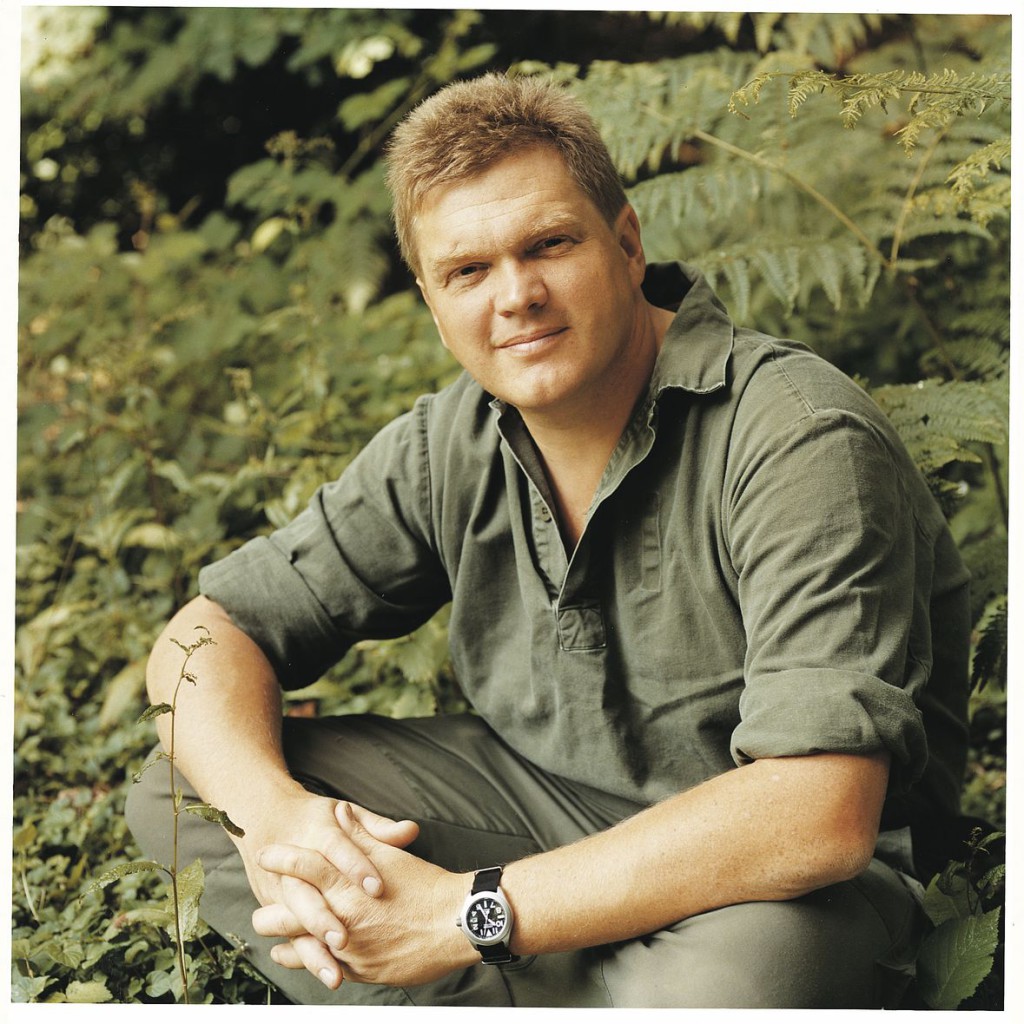 Most of the challenges are borne out of a desire to simply see if I can, to push myself mentally and physically and to achieve something I, myself, can be proud of. Some, however, are as a result of a little bit of hope, naivety and a wild imagination. The London to Brighton and back home challenge in June started out as just the classic 54 miles, then talking to people who had undertaken the challenge themselves I began to see what a nightmare travelling back by train would be. So, I plotted out a route home and it felt achievable, so I committed to it.

I’ve looked to other, formally organised events for inspiration as well – there are lots of events which take in the Thames Path and being fairly local (and flat) I felt strongly that this was something I wanted to do. Again it was a question of how far could I go – so I spent a bit of time with a map and a calculator in order to work out a reasonable distance for 24hrs between two landmarks. Is 110km in 24hrs achievable – possibly not, it will be a hard slog and it may involve some sleepwalking, but as with all of the challenges I will train and give it my best shot.

I’ve tried to make it so the biggest challenges are the end of the year – as my mum said “well you’ll be super fit by then anyway” (thanks Mum!!) – August; 110km Walk from Tower Bridge to Henley Bridge, October; Bournemouth Marathon and November; John O’Groats to Land’s End (changed from December) – so those three months are going to be huge. But again, my philosophy in life is ‘hell or glory, I don’t want anything in between’, so doing lots of small challenges just would do it for me.

It is about making small changes to the way you live – try to prepare for the week ahead on a Sunday – if it’s a weekend with my girls then we tend to make the meals together, such as the overnight oats or portioning up the snacks and fruit. They seem to enjoy it and find it hilarious that I eat so much, hopefully it installs some good habits in them as well for later life. So sharing the joy (mostly) I get from running and being outside is something I really want to share with my girls. In October the three of us are taking part in the Big Fun Run Milton Keynes, which is a 5km run around Willen Lake – I am sure this will be both a joy and a challenge, but I know despite some protests the girls will get a lot out of it.

The list hasn’t stopped growing, the more I find I can do the more I want to do – London to Paris, Kilimanjaro, the Welsh 3000’s and many more are still all ready to be conquered. I hope that by doing these events and putting my story out there I can raise some awareness and much needed funds for an amazing charity. My aim is to raise a minimum of £5,000 for Make-A-Wish – just under £5 for every challenge mile travelled. All of the challenges, equipment and training is self-funded ensuring every penny raised goes straight to Make-A-Wish so they can grant magical wishes to children and young people with life threatening conditions.

So if I can put myself through some pain in the short term in order to give a wish child and their family an amazing experience, that restores some hope and joy to their lives then I will do it.