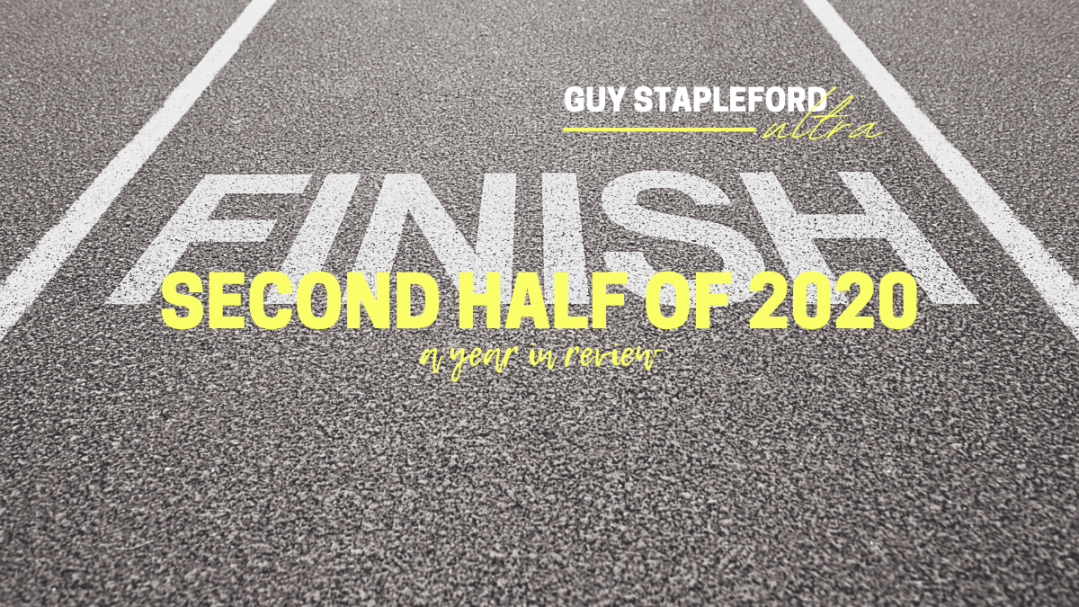 Well, there we have it…finally 2020 is done and we are underway with our 2021 journey, full of hope for a better and brighter year. Ahead of my first event of the 2021- the vWTTC 24hr – I wanted to recap the second half of 2020, much like I did in July for the first half of it. You can read that first part here.

2020 has been tough for all of us, but maybe if we take the time to reflect we’ll see it hasn’t all been bad?

Deflated from how vRAW had ended July saw a return to riding on the 1st of the month and a gradual start back to formal training for future challenges. On a personal note I tried Stand Up Paddle boarding for the first time – loved it, if cycling wasn’t such an expensive hobby I could get in to this.

I managed to get in a few 100km night rides over the course of July, while the weather was nice. I’m a big believer in the need to train outside of your normal hours, to get used to riding at night and when fatigued, especially if you want to be a good endurance racer. Short rides, but I made the effort to push myself a little bit and get out places I wouldn’t normally see at night. I’m sure you’ll agree, Oxford is stunning anyway but at night it’s something else.

The end of the month saw some welcomed downtime (and sun) on a family holiday to Norfolk – nothing like recharging the batteries.

Holidays over, it was time to crack on with the training and build up to a big end of year push. On the 14th I made for Everest base camp – ok not the real one, a virtual ride with an elevation of 4,424 metres which is half the height of Everest. For anyone considering an Everesting, taking on a few laps on the Alpe is a great way to test yourself and prepare in the comfort of your own home / pain cave.

From the mountains it was back to the real roads of the UK and a DIY Audax. Cancelled from July, I set out to ride this event myself and not lose the training and learning opportunity. The goal was to ride the 550 miles from London to Land’s End and back to London in just under 4 days. Day 1, I set off at 8pm Sunday night from home and rode through the night and Monday to get to St Austell in Cornwall. Riding this solo was tough, but once I’d got through the night to Taunton and breakfast, I knew I could make it. Day 2 was something else entirely, overnight Storm Alex hit the UK and made progress challenging – it was easily the worst conditions I’ve ever ridden in for the strength of the wind and the sheer volume of rain water. From Land’s End the intention was to loop back to Exeter, but by 6pm I was 50 or so short of the hotel and completely shattered. I hoped on a train for the last part, hoping to recover some strength for the final 170 miles back home. Day 3 was a different day again, brighter with only a slight headwind. I think the prospect of heading towards home always makes the last bit easier. I was home in the last of the daylight with a beer in hand and a smile on my face. While I skipped a bit, I was extremely happy with how the challenge went, I rode my single longest day as well as pushing myself mentally and physically harder than I ever had.

First up was the virtual Everesting of the Alpe de Zwift. Having completed the base camp previously I had a really good plan for riding this, knowing the fuel and time required to complete it. 8.5 reps of the hill took me just over 16hrs and 130 miles to complete…this was however, nothing compared to what would come next.

The next Friday I set off for Whiteleaf Hill in Buckinghamshire to complete a real life Everesting – 70 ascents of the hill would be required. Sadly on ascent 18 or 19 my rear derailleur hanger snapped, spinning up and taking a chunk out of the seat stay. With no option to repair, we reluctantly called it a day and headed off to get some breakfast. With a new bike in the pipeline, makeshift repairs were needed – without a hanger I removed it and shortened the chain so it sat on the smallest gear ratio. So a week later, on the 25th, with one gear (and the inability to stand-up, because doing so would cause the chain to come off) I set off and completed the 70 repeats in a fraction under 20hrs to achieve the required 8,848 meters of elevation. The chain was a constant source of frustration but it wouldn’t have been the challenge it was without it.

A week after Everesting came the next challenge, an Everesting 10k Roam – 10,000 meters of elevation and a minimum distance of 400km. I based myself in Minehead to take in the best of the hills in and around North Devon. This was however a challenge that did not go to plan – after just 112km and nearly and 2,000m of climbing – I stopped the challenge. I was burnt out, I’d gone out too hard and that combined with the atrocious weather I had very little left in the legs. No excuses, just another humbling learning experience.

Picking myself up again, once home, was hard – all the confidence from LDN-LE-LDN had gone. However, having the all new Zwift Racing League starting provided a welcome distraction. Spokes Racing Team was born and our two teams began racing with thousands of other racers from across the world. I’m not a racer by nature, I don’t have that short range power, but boy was it fun. Racing is tough on Zwift, it’s max effort for the first 5 mins before the bunch calm and then it’s hanging on to what you’ve got left. On the plus I got some decent results and saw my FTP increase week on week.

November brought an early Christmas with many welcoming the distraction from the ever present virus and impending tighter restrictions on movement.

My early Christmas present would be qualification for RAAM through the first virtual Revolve24. To qualify I’d need to ride 600km over the 24hr race, which was hosted on FulGaz across 6 iconic motor circuits. While I was agonisingly close – just 15km short of the target – I finished 4th and with a feeling of rare satisfaction. No the primary goal was achieved but I learnt a lot and gained a lot of confidence in my abilities as an ultra distance cyclist. A week off beckoned as reward for my efforts.

At the end of November we kicked off the Spokes Monday Social Spin on FulGaz – a platform I was becoming to know well and love. These rides are open to all and I host a 45min recovery ride where we chat with a special guest about all things cycling, training, nutrition and mental health. Why not come and join us one week? So far we’ve discussed goal setting, the importance of being lazy and kit for performance and selfishly I’ve been able to hear from rider Het, a RAAM veteran who’s been sharing his knowledge and experiences.

December carried a lot of hope – hope of spending time with our families and hope of a better year to come.

I rode my first outdoor century in what felt like a very long time in December, as part of the Restrap Winter Solstice Century challenge. I plotted a route down towards Reading and then looping back through Abingdon and Oxford to home. I like to make the most of these challenges, by trying to plot my route with roads I’ve not ridden before, to keep it interesting and to help me explore more of where I live. I spotted Anthony Gormley’s Another Time II while I was in Oxford, a nice surprise as, as many times as I’ve been there I’ve not seen it before.

On the 20th I joined team dhb for a very different type of virtual event – CrankedUp – which billed as a party in your pain cave. The team of 4 of us each put in a 90min stint over the course of the event, I was up after Brand Manager Rob, who stayed on and we had good chat while we listened to the music. A well put together event and I know they’ve got more planned, so expect it to get bigger and better from here!!

The second challenge of the month and a big one to end the year on was the annual Rapha Festive500 – a challenge to keep you riding (ideally outdoors) between Christmas Eve and New Years Eve. I made a decent start with a 125km turbo session on Christmas eve, dressed as Santa no less. However, it never really got going after that. The new lockdown rules in the UK took a toll on my mental health, I felt like the Santa suit might help lift my mood and help carry me through. But, sadly it did not. I lacked the motivation or desire to get out and do the longer rides and I was happy to let the challenge go and not beat myself up about it.

A tough year in so many ways, personally and on the bike. Specifically on the bike though, with a little creativity lockdown and a lack of formal events doesn’t have to be the ‘end of your season’. I’ve still managed to take on some incredible challenges, ride over double the distance i did in 2019 and raised over £1,000 for Charity. For me, that’s a win.