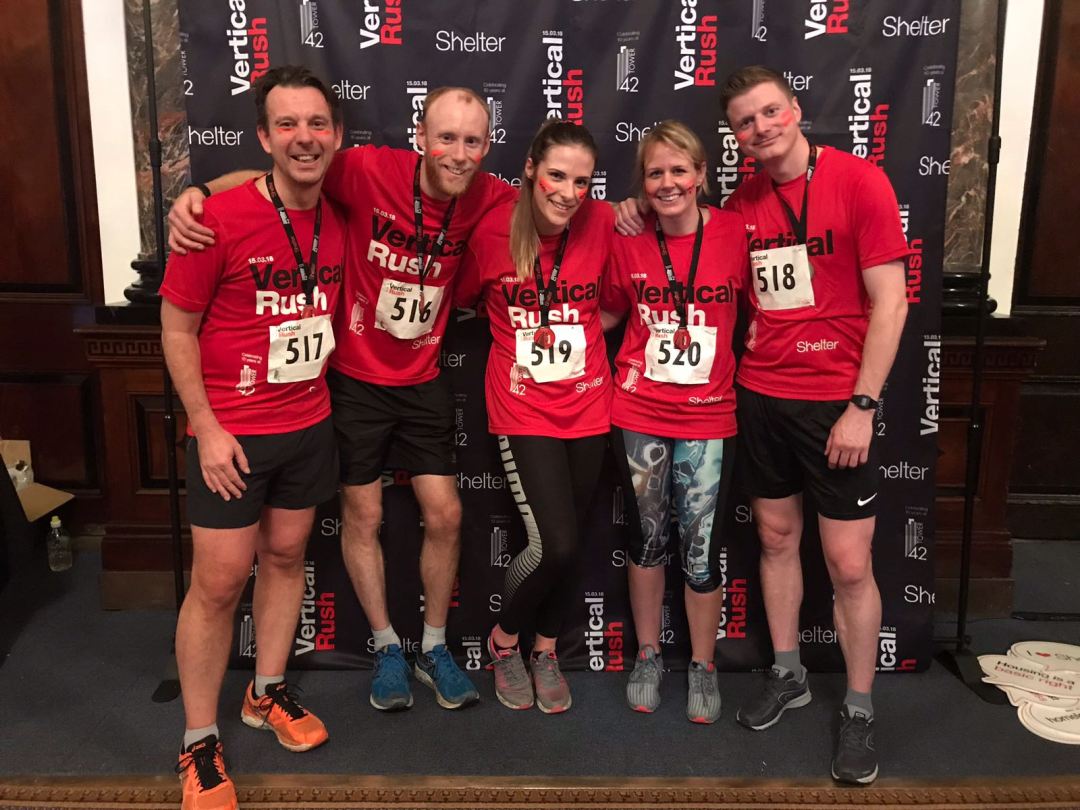 Vertical Rush is, by all accounts, the biggest tower running event in the UK and on Thursday 15 March I, along with 4 colleagues joined over 1,000 other runners taking on the 42 floors and 932 steps of Tower 42 in London.

Now in its 10th years this challenge is growing ever more popular – if you can believe it the course record, set in 2012, is an incredible time of 3:58, held by four-time Tower running World Champion (yes, this is a thing) Thomas Dold of Germany.

The event is organised by Shelter in order to fund their work supporting families throughout the UK struggling with homelessness and bad housing.

I’ll freely admit to having never run up a tower before and I stumbled across this event while recovering from cycling from John O’Groats to Land’s End. I’m sure there are those of you who can appreciate the post event / challenge blues and the need to sign up for something new to look forward too! What I liked about Vertical Rush was the fact that it was the tallest of all the events I could find, I mean if you’re going to do it you might as well do the biggest one right? But more seriously, working in the housing sector this felt like a natural fit and something we could get behind as a business.

Nearly 1,600 people turned up to run up the old Natwest Building, from amateurs to professional tower runners and the odd “celebrity” – Joe McFadden, Calum Best and Kimberly Wyatt.

The event is run in waves, set off every hours starting from 8 am. We met, as instructed, in Gibson Hall next to Tower 42 45 minutes before our wave start time of 11am and collected our race numbers and red Vertical Rush t-shirt. Once changed your ushered in to hear a short safety briefing and pep talk before heading outside to one of the side entrances to the building. It’s certainly an ominous site looking up and seeing the challenge rising up in front of you.

Once outside, it is an impressive sight – not just the Tower, but the sea of people all in red accompanied by live music and the excited / nervous hubbub from a few hundred runners ready to go.

Once at the foot of the stairs runners are releases one by one and you begin your ascent.

In the briefing your told to keep to the outside, however as you near the top and as people tire this seems to have either been forgotten or ignored. So there were a few occasions when it felt like you were held up, but a polite word and most people happily moved aside so you could pass.

In terms of tackling the event there I definitely felt an initial ‘burn’ as we hit the first few floors and the legs and lungs struggle to adjust. That said by half way I had found a rhythm and felt fairly comfortable and was able to just focus on getting up. The shout of “only 3 and a ½ floors to go” caught me a bit off guard and I realised I had a bit more left in the tank – so I stepped it up and tried to give a final burst.

The plan was for the 5 of us to run together, as a team, however that soon went out of the window. Running on the flat is completely different and the stairs made it impossible to find a pace we could all stick to, so we ended up becoming a little spread out by the end, as you can see by the times;

So despite it being hard, it was great fun and upon arriving at the top (once your breathing has recovered) you are rewarded with a cracking view across London from the top.

This was a well organised, challenging but fun event that feels like a real achievement. Importantly, the Paradigm Team have raised over £1,500 for Shelter, which will ensure over 40 families can get the face to face support they need to help them keep their homes.

See all of the race results here.